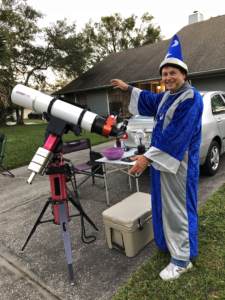 Professional/adjective(of a person) engaged in a specified activity as one’s main paid occupation rather than as a pastime.

Amateur/noun
a person who engages in a pursuit, on an unpaid basis.

Accident/noun
an event that happens by chance…

Hello, I’m Richard S. Wright Jr., and I am a nerd. A very very lucky nerd.

I’ve been an amateur astronomer, pretty much since birth. In high school and college, I used to write astronomy programs for myself. First on a Ti-99/4A, then a Commodore 64, and finally after learning Pascal and C, for DOS, Windows, you know the drill. I went to school to be a software engineer, but my hidden lurking passion was always astronomy. I dreamt of working full time making astronomy software. After a couple decades as a software developer, I eventually joined Starry Night, and I helped with the Windows version and OpenGL support working remotely from Florida while teaching graphics programming at Full Sail University to gaming students. After we shipped version 4.0… <entropy occurred>… and I , along with a few other folks at Space.com (the parent company) ended up getting laid off. I ended up at Software Bisque where I spent nearly the next 20 years working on TheSky Professional Software, a 3D solar system simulator, and lots of embedded and imaging device “stuff” that controlled the worlds best research grade robotic telescope mounts. I got to be an astronomer… by accident… because I was writing astronomy software.

Today I’ve gone back to the “tech” industry full time at LunarG (gotta love that name!), but I still do astronomy avidly, write frequently for Sky & Telescope as a contributing editor, and via my own side-corp Starstone Software Systems continue to work on astronomy related software. I love both visual astronomy and imaging, and serve on the board of my own local astronomy club (CFAS – Central Florida Astronomical Society). This blog is just because I will burst if I don’t write on a regular basis, and I often have more to say about things than I probably should 😉

No comments to show.